Not only does The Open celebrate its 150th year this week, but it returns to its spiritual home – St. Andrews, Scotland – to do so. Here we trace the long history of golf’s greatest tournament and how, as we at Lyle & Scott rapidly approach our 150th year, the story of The Open intertwines with our own rich heritage that has taken us from the rolling hills of Scotland to the world.

The Open – often referred to as the ‘British Open’ or ‘Europe’s Major’ – is the oldest and possibly most prestigious golf tournament in the world. Founded in 1860, it was originally held at Prestwick Golf Club (also in Scotland) before it began to rotate between a selection of Britain’s best coastal courses in 1872. In fact, The Open has always been hosted in either Scotland or England, with the only exceptions being 1951 and 2019 when it was hosted at Royal Portrush in Belfast. As we know all too well, British summers can be… unpredictable at the best of times. It’s these vagaries in the weather that separate the Open from its transatlantic counterparts.

In its early years, the tournament was dominated by British players, until Frenchman Arnaud Massy lifted the Claret Jug in 1907. In the decades that followed, golf’s popularity exploded and The Open quickly became a global event. Other notable winners read like a list of the game’s greats: Harry Vardon won the championship six times, Peter Thomson and Tom Watson five times apiece, and Gary Player not only won it three times, but holds the record for the most appearances at The Open – no less than forty-six rounds. Even the great Tiger Woods has lifted the Jug aloft, and the winner of the last Open, in 2019, was Colin Morikawa with an impressive score of 265.

Meanwhile, Lyle & Scott was founded a mere two years after The Open took on its established form, in 1874. Moreover, our spiritual home – Hawick, in the Scottish Borders – is less than eighty miles away from Prestwick. Safe to say, we’ve always been kindred spirits…

Our story in the game is well known: after conquering the world of knitwear we turned our attention to golf.  Building on our world-renowned expertise for crafting quality menswear, we launched our first golf range in the 1960s and quickly became known as ‘The Original Golf Brand’. However, the creation of our now iconic Golden Eagle, which coincided with the golf launch, really rocketed our brand to golfing superstardom. Inspired by the eagle that adorned the world-famous Gleneagles course, our new logo saw the brand quickly taken up by some of the biggest names in the game like Gary Player and Arnold Palmer.

However, it was in the late 70s and 80s that the Golden Eagle really took flight at The Open, when some of the most iconic victories in the history of the championship were achieved by world-class golfers proudly sporting the Golden Eagle on their chest. 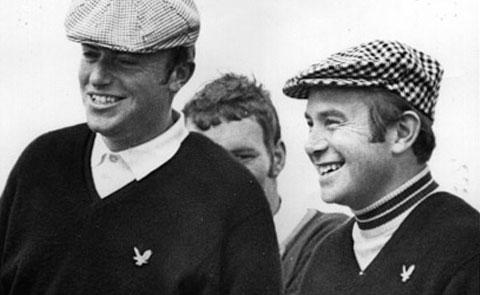 Jack Nicklaus was well on his way to making history when he teed off on the final hole of the 1978 Open, metres away from becoming the champion for a third and final time. This may have been his last time receiving the Claret Jug, but it was also his most iconic and celebrated championship: a third Open victory for Nicklaus saw him achieve what no other golfer had done before: a triple career grand slam, winning all four of golf’s modern majors three times over. Historic events like this don’t come around often – in fact, the record wasn’t matched until 2008 – and he did it all whilst sporting a beautiful, argyle Lyle & Scott jumper.

In contrast, eight years later in 1986, Greg ‘The Shark’ Norman marked the first high point of a triumphant professional career by storming to victory at the Open, clad in a fetching yellow, geometric patterned Lyle & Scott jumper that has subsequently amassed legendary status amongst our staff and customers alike. 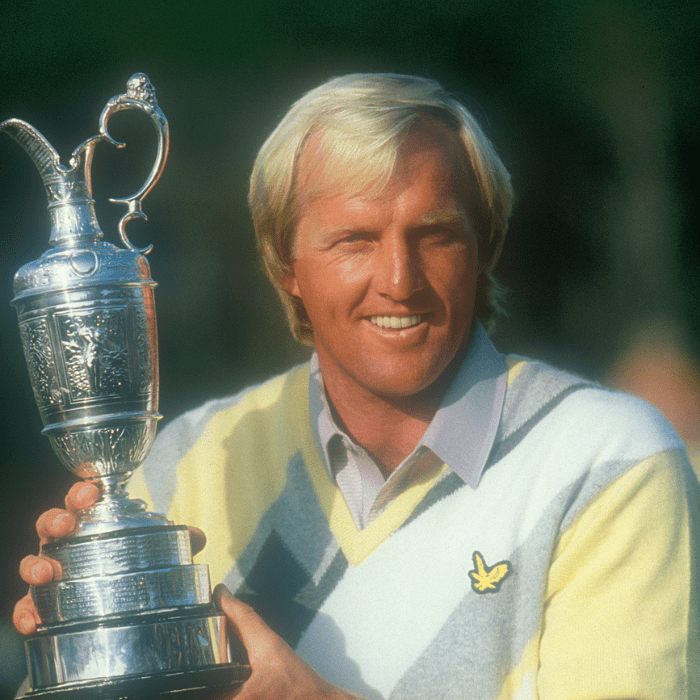 Where are we now?

Safe to say, we know a thing or two about The Open. Born mere months and miles apart, we’ve grown with The Open, soaring to international acclaim alongside golf’s oldest, greatest championship.

But how are we helping The Open, and the wider game, evolve today? Check out our specially designed page for The Open week with details on our game-changing partnership with the world’s leading golf content creator Rick Shiels, as well as must-have championship looks and exclusive discounts.

It’s our game – always has been, always will be.

Click the link below to explore our range of premium golfwear, as worn by Open Winners and golfing legends.

If reading about two Scottish icons, the Golden Eagle and the Open Championship, have inspired you to head out onto the course, you need to take a look at our Beginner’s Guide to Golf using the link below.

The Beginner's Guide to Golf

Learn how to play golf and pick up a few tips and tricks along the way, as we break down each golf rule.

Lyle & Scott do not claim ownership of any images unless otherwise stated.

How to Build a Capsule Wardrobe