It should come as no surprise that fashion and football are our twin passions. For over forty years – since casual culture swept the teeming terraces of British football – the Golden Eagle has been at the beating heart of the game. The intertwining of football and fashion is a tradition that dates back generations, and here we trace that overlap by studying some of the biggest fashionistas in the game, and how Lyle & Scott came to be an essential part of their wardrobes, as well as those of their devoted fans and followers. From Lisbon to Lewes, here’s football, fashion, and the Golden Eagle.

The best of both worlds

George Best marked a sea change in footballing culture. Before Best, footballers were humble, meat-and-potatoes, salt-of-the-earth men. The world of fashion, glamour, media and advertising was territory they rarely, if ever, ventured into.  After Best, footballers became playboys, models, superstar pin-ups and even – heaven forbid – pop stars.

Central to this was Best’s passion for fashion. In his spare time away from his Manchester United duties, Best would bounce between Manchester’s bustling discos and nightclubs. When he arrived in the city in the early 60s – whilst we were making our name in golf – he was sporting a Beatles-esque suit, boots, and fringe look. In fact, Portuguese media even dubbed him ‘El Beatle’ when visiting Lisbon for the European Cup quarter-final against Benfica, as he stepped off the plane sporting a bowl cut, thin cut suit, leather coat, sunglasses and, most importantly, a souvenir sombrero… 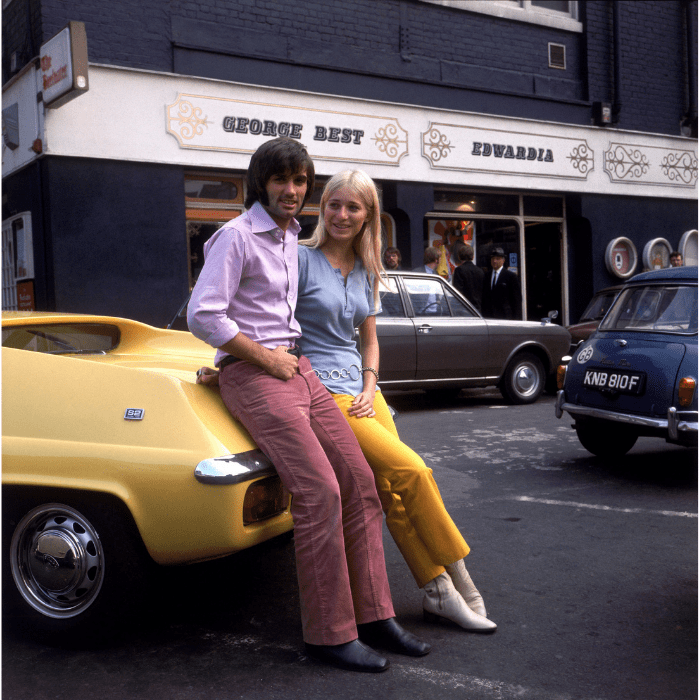 In no time at all though, Best had pivoted to a Mod style (read about our relationship with the mods here) and in 1967 set up his very own boutique, Edwardia, in central Manchester with close friend and fellow player, Man City’s Mike Summerbee. As well as being “another way of pulling”, the boutique provided the sports star with an outlet for his more sartorially inclined pastimes and cemented footballers as cultural and fashionable icons, as well as sporting ones.

Check out the below products if you want to get Best’s game-changing mod look.

Fast forward over fifty years and the lay of the land has changed. Footballers are still on top of the world, but the old greats have made way for a new generation of superstars. In another Portugal-Manchester crossover, Cristiano Ronaldo is the new – and very talented – kid on the block. As we were also reaching new levels of fame, thanks to our classic Vintage designs being worn by the rising talent on the Indie explosion – The Arctic Monkeys, The Libertines, and The Kooks, to name but a few – a young Cristiano wanted to get involved…

A long-time fashionista, calling clothes an ‘incredible creative outlet in expressing who you are’ and an exciting opportunity to ‘take risks’ and ‘mix things up’, Cristiano stayed true to his words when he was papped sporting one of our iconic knitted V-necks in a baby pink colour, with a white shirt and a very popped collar underneath – a strong look to say the least, and proof that our classic knits are a timeless fashion essential. Just as versatile now as they were a century ago, they’re not reserved for sporting heroes and deserve a spot in everyone’s wardrobe. 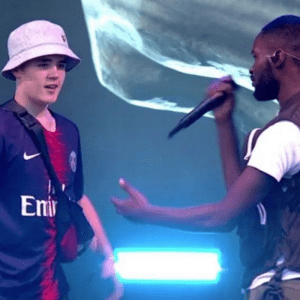 What more perfect proof could there be that the football-fashion crossover isn’t just the preserve of the highly-skilled, highly-paid stars of the game than when a fifteen-year-old lad called Alex took to the stage at Glastonbury; wearing a Lyle & Scott Bucket Hat and PSG strip, to belt out ‘Thiago Silva’ with Dave, the rapper.

Cast your mind back to the summer of 2019, when Brexit was the buzzword of the day and the legendary British festival was in full swing before its unprecedented three-year hiatus. Dave is halfway through a belting set on The Other Stage and sees a suitably hyped-up teen donning a PSG strip, then the club of the eponymous Thiago Silva. Dave calls him up and, to the world’s surprise and excitement, Alex absolutely nails every word of the song, and does so wearing our emblematic Golden Eagle.

We love our sport but make no mistake, we love our music too. This moment marked a coming together of all our greatest passions – fashion, football, and tunes. If you want to get Alex’s look, take a look at the products below, or get festival-ready with our What to Wear to a Festival blog.

And what about now?

It’s over three years since Alex’s Glastonbury debut, but we’ve been plenty busy shoring up the football-fashion crossover. Our Lovers FC collaborations, 2021 Euros tops, and timeless Ringer Tees all take inspiration from the beautiful game. Plus, the pros continue to sport our stuff: Eden Hazard was recently spotted with a Golden Eagle on his chest during a TV interview. Safe to say, we’re still keeping football fashionable.

But more than this, we’re still committed to giving back to the game we love. Whether that’s with our six-figure sponsorship deal for champions of equality and inclusivity, Lewes FC, or our dedication to supporting football at the grassroots all across Europe, Lyle & Scott is where football and fashion collide.

For fashion advice and more, including How to Build a Capsule Wardrobe and The Summer Clothes and Accessories You Need for Your Next Holiday, explore our dedicated style blogs.

Now you know more about how our two passions intertwine, explore our relationship with the football casuals in more detail with The History Behind Lyle & Scott Football Casuals using the link below.

Discover our history in football casual clothing and our favourite pieces from our Casuals collection.

Lyle & Scott do not claim ownership of any images unless otherwise stated.

The Summer Clothes and Accessories You Need for Your…

Ones to Watch: Vistas

Fit for a King